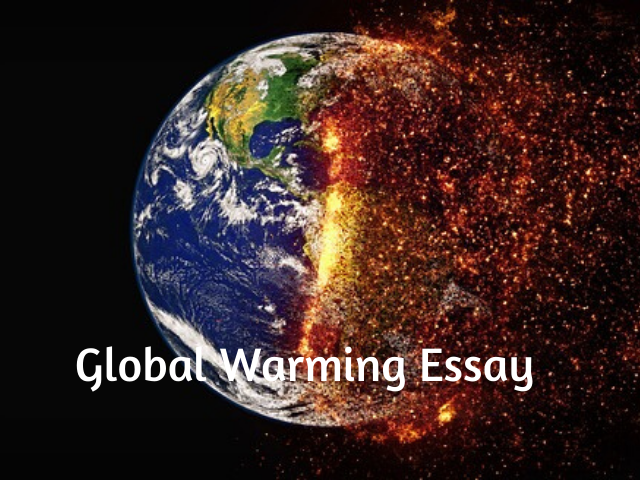 Global Warming Essay: Global Warming Essay is an important topic because it educates the readers about the consequences of global warming. Ever since the Industrial Revolution, carbon emissions have spiked drastically. When these carbon compounds are introduced into the earth’s atmosphere, they trap heat from the sun, thereby increasing the global average temperature. This phenomenon is called the greenhouse effect, which directly affects the rate of global warming.

Global warming, if left unchecked, can have dire consequences on the planet. Its ill-effects can disrupt life and the ecosystem. From an academic perspective, global warming is a moderately difficult topic. This is due to many aspects of the topic, such as the anthropological factors, technological factors, and more. However, the sample essays provided here are designed to be easily understood by the students.

What is Global Warming?

The average global temperatures rise, eventually disrupting the balance of nature. At first, the polar ice caps melt, leading to an increase in sea levels. This can cause many animals that live in the poles to lose their natural habitat.

Gradually, the average global temperatures also rise, causing global climatic changes. Storms and droughts increase in their intensity; flooding, famine and other natural calamities increase in their frequency. Eventually, it can change the natural landscape as well as the socio-political landscape. Scientists have even predicted that climate change brought about by global warming can introduce many new and virulent diseases.

Venus is the hottest planet in the solar system, though it is not the closest. This is due to the thick carbon-dioxide rich atmosphere of Venus. However, scientists speculate that millions of years ago, carbon dioxide levels were similar to earth, but a phenomenon called the Runaway- Greenhouse effect changed the planet drastically.

This phenomenon occurs when the greenhouse effect reaches a crucial tipping point, where the heat trapped does not escape, causing the temperatures to rise uncontrollably. It can rise to the point where oceans would start to evaporate and the rock sublimate, releasing even more water vapour and carbon dioxide into the atmosphere.

Though such an apocalyptic scenario may not occur on earth, the effects of global warming are still apparent. Humans have to reduce their carbon footprint and change for the better, else risk causing planet-wide disruptions.

What is the Meaning of Global Warming? How Is it Caused?

Global warming is a phenomenon where the average global temperatures increase at an alarming rate. The underlying cause of global warming is the greenhouse effect. However, the greenhouse effect is an important factor for the survival of life on earth. Without this phenomenon, the earth would lose heat and freeze over, rendering the planet uninhabitable. Human activities have accelerated the rate of global warming, to the point where more heat gets trapped than it is released.

What are the Effects of Global Warming?

Global warming can impact the planet drastically, and change its landscape if left unchecked. Moreover, the balance of nature would be disrupted, causing loss of habitat and extinction of plants and animals. Global warming also causes the sea levels to rise, flooding the coastlines and displacing millions of people.

Global warming is also linked with extreme climatic events, such as tropical storms and hurricanes. These events will rise in frequency and intensity, causing wide-scale destruction and loss of life. Droughts will be more severe and cause imminent famine. Global warming can also bring about social and economic issues. Many people around the world will have to endure starvation. There would also be an emergence of many diseases, some of which are more deadly due to new and favorable environmental landscape.

How to Prevent Global Warming

The most significant sources of carbon emissions are linked to fossil fuels. Hence, if we are to reduce our reliance on these sources of energy and adopt new and environmentally friendly alternatives, we can reduce our carbon footprint. Moreover, planting more trees will help as trees are considered as carbon sinks, which means they absorb more carbon than they give out.

Question 1.
What is global warming Essay in English?

Answer:
Global warming is a phenomenon where the average global temperatures increase at an alarming rate, causing planet-wide repercussions.

Question 2.
What is global warming in paragraph?

Answer:
Global warming occurs when carbon dioxide (CO2) and other air pollutants and greenhouse gases collect in the atmosphere and absorb sunlight and solar radiation that have bounced off the earth’s surface.