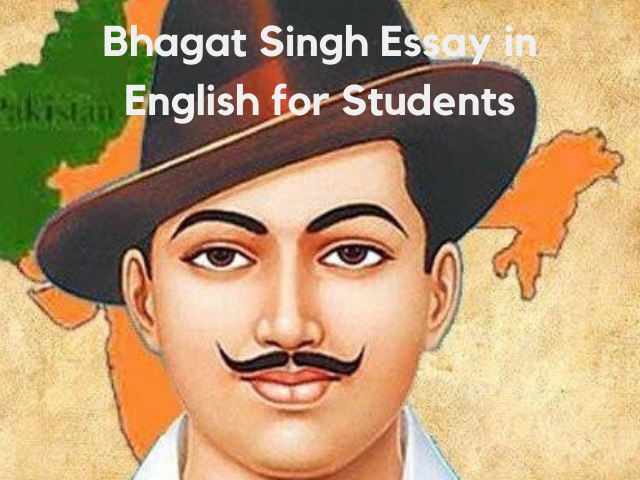 Bhagat Singh Essay: Bhagat Singh was an Indian Revolutionary and an icon of India’s struggle for freedom. His execution at the age of 23 transformed him into a hero of the Indian Independence Movement. His legacy inspired many Indian youths to follow in his footsteps.  Bhagat Singh’s actions were disapproved of by many, including Gandhi. His methodologies advocated violence, which was in complete contrast to the Non-Co-operation Movement.

From an academic perspective, Bhagat Singh essay is an important topic for students to comprehend. The essay aims to educate how India got its freedom and the people who were responsible for it. Hence, students must be well-versed with the topic if they wish to secure more marks. Moreover, students will have to present the essay in such a way that it becomes interesting and engaging to the reader. They can achieve this by using simple language, avoiding jargon and presenting in bulleted points wherever possible. The following sample essay is created keeping all these aspects in mind.

Bhagat Singh, popularly known as Shaheed Bhagat Singh, was born in 1907 to father Kishan Singh and mother Vidyavati in Lyallpur district, present-day Pakistan. Bhagat Singh’s family was politically active, with his father and his uncles taking part in the Indian Independence Movement.

Bhagat Singh joined the National College in Lahore in 1923. He took part in many extracurricular activities including theatrics and drama. He even won an essay competition organised by the Punjab Hindi Sahitya Sammelan, where he wrote about the problems faced in Punjab.

In 1926, Singh founded the Naujawan Bharat Sabha, an Indian socialist youth organization. This organization banded workers and peasants to rise against the British Raj and revolt. Eventually, he joined the Hindustan Republican Association, which had prominent individuals such as Chandrashekar Azad.

Singh also had a profound influence on the local youths, inspiring them to commit acts of violence against the British. The police became concerned and arrested Singh on the pretext that he was involved in a bombing that had taken place in Lahore.

Bhagat Singh wanted to avenge the death of Lala Lajpat Rai by the assassination of the superintendent of police, James A Scott. Singh believed that Scott was personally responsible for the death of Rai, though he had died of a heart attack.

However, in a case of mistaken identity, Singh shot and killed John P Saunders, an assistant superintendent of police, on December 17, 1928. His actions were condemned by many, including Mahatma Gandhi.

Singh fatally shot Saunders when he was leaving the District Police headquarters. After the assassination, Singh escaped through the DAV College entrance, which was across the road from the police headquarters.

In the ensuing pursuit, Singh shot a head constable, Chanan Singh, who eventually succumbed to his injuries. Bhagat Singh fled to his safehouse on a bicycle that was arranged nearby.  The CID launched a massive search, blocking all entrances and exit to the city. They also kept an eye on all youths leaving the city, scrutinising their identities.

Singh hid for two days, before calling Durgawati Devi, the wife of Bhagwati Charan Vohra, another freedom fighter. She agreed to help Singh escape Lahore by disguising themselves as a couple. Singh dressed up in western attire, shaved his beard and cut his hair. To conceal their real identity thoroughly, they carried a sleeping child and managed to successfully escape from Lahore.

In 1929, Bhagat Singh proposed a daring plan to the Hindustan Socialist Republican Association (HSRA). Inspired by the French anarchist Auguste Vaillant, who bombed the Chamber of Deputies in Paris, Singh aspired to do the same.

Singh’s plan involved detonating a non-lethal bomb inside the Central Legislative Assembly.  The “decoy” motive was to protest against the Trade Dispute Act and the Public Safety Bill. However, the actual motive was to eventually get arrested and use the court appearance to publicise Singh’s cause.

Leaders of the HSRA initially rejected the idea, but eventually, they gave in and agreed that Singh was the best candidate for the job. On April 8th 1929, Singh and Batukeshwar Dutt threw two non-lethal bombs into the Assembly Chamber while it was in session. Though it was intended to be non-lethal, they ended up injuring a few participants. After the bomb was thrown, Singh threw the leaflets and shouted the slogan “Long live the revolution”, (Hindi: Inquilab Zindabad).

Both men were immediately arrested and sent to prison where they awaited trial. Singh was found guilty of killing Saunders and was sentenced to life in prison. However, the court overruled the judgement and changed it to a death sentence.

Singh was scheduled to be hanged on March 24, 1931. However, he was executed 11 hours ahead of schedule- on March 23, 1931, at 7:30 p.m. It was reported that Singh was left to hang for an hour to eliminate the risk of accident or error on the part of the executioner. After the jail authorities removed the body, they broke a hole in the rear of the jail and cremated it. The ashes were then dispersed into the Sutlej river.

Executed at the age of 23, Bhagat Singh was made a national hero in India. His actions and efforts to gain freedom inspired many to follow in his footsteps. Today, he is immortalized in many statues and portraits in important Indian establishments such as the Parliament of India. He is even adorned in many films and serials. The most recent was Rang De Basanti, which was released in 2006.

Question 1.
Who was Bhagat Singh?

Answer:
Bhagat Singh was not married. He ran away to Kanpur to avoid an arranged marriage.

Question 3.
Which name was Bhagat Singh often referred to?

Answer:
He was often referred as Saheed Bhagat Singh

Question 4.
Where was Bhagat Singh born?

Question 5.
What is the name of Bhagat Singh’s mother?