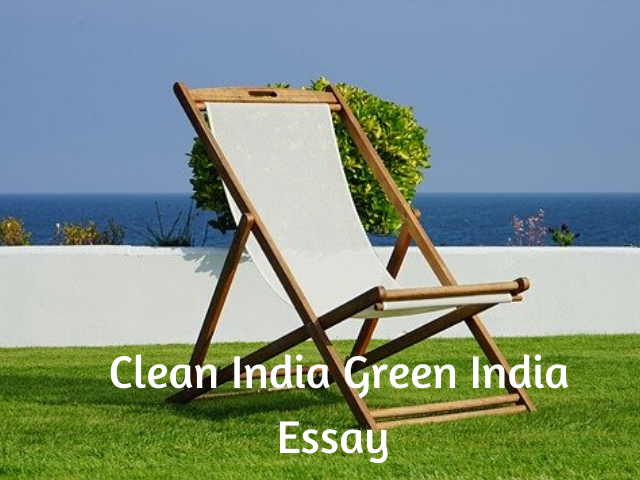 The Green India Campaign is another campaign approved by the Prime Minister’s Council on Climate Change. The mission’s agenda is to increase the number of forested areas, to enable more carbon sequestration. This activity will supposedly reduce the greenhouse gases in the atmosphere, thereby reducing the effects of global warming. From an academic perspective, students must familiarise themselves with the purpose of these campaigns. Moreover, students must also be able to present their essay in the best way possible.

What are Clean India And Green India Campaigns?

Clean India Campaign, also known as the Swachh Bharat Abhiyaan, is a campaign that is aimed at resolving the garbage problem we face in India. In today’s economy, garbage is a real threat to the development and prosperity of a nation. Commercialization and industrialization have only made this problem much worse. Moreover, with plastics making up a significant chunk of the wastes generated, the disposal becomes hard.

Green India Campaign is a national mission approved by the Indian Prime Minister’s Council on National Change. The primary agenda of this mission is to combat climate change and its negative repercussions. This goal is fulfilled by planting forests to increase the rates of carbon dioxide sequestration. Essentially, this means the carbon dioxide is absorbed from the atmosphere and stored in the trees; thereby reducing the carbon footprint on our planet.

Purpose of the Clean India And Green India Campaigns

When we look at the broader aspect of these two campaigns, it is understood that they both aim towards mutual goals. Making the planet cleaner and more sustainable for future generations. To learn why we need to take care of our planet and become responsible citizens, we need to look at the possible future repercussions of our actions.

Products made of plastic do not quickly decompose – in fact, these products usually take hundreds of thousands of years to decompose. For instance, foam plastic cups can take 50 years to decompose, a plastic straw will take 200 years, and plastic bottles will take more than 450 years to decompose fully. Moreover, most of the plastic we produce ends up in the ocean. Here, they become brittle and break down into tiny particles, which then become incorporated into plankton – the heart of the food chain. These microplastics can then travel up the food chain and eventually into humans.

Consequently, plastics are not meant to be digestible nor designed to be digested by humans. It has also been termed as a carcinogen – a substance that significantly increases the risk of cancer. Global warming can be directly linked to plastics and its production. Moreover, the increased production of greenhouse gases has accelerated the greenhouse effect. This has already caused the average global temperatures to rise. A rise in temperatures can have ill effects on the natural environment as well as the social, political and economic environment.

We need to act fast before it becomes too late. India must set an example to the rest of the world and be the forerunner for this philosophy.

The age-old proverb, “Cleanliness is next to Godliness”, implies that we need to keep our surroundings clean. Though a proverb, it has many implications in the real world. For instance, the accumulation of garbage can harbour vectors for many diseases. In the 13th century, the Black Death, also known as the Bubonic Plague spread throughout Europe, leaving death in its wake.

Today, scientists know that the plague was caused by rats and fleas infected with bacteria. These rats thrived during that time as the streets of Europe were covered with filth. Cleanliness was lacking, and most cities did not have proper waste disposal methods. Today, we must ensure that history does not repeat itself. Hence, the campaign, Clean India, is introduced to ensure that no such event occurs. The campaign was launched by Narendra Modi, India’s Prime Minister, on October 2nd, 2014. It was also one of the largest initiatives, with 3 million individuals participating in the event.

Ever since the Industrial Revolution, our carbon footprint has increased drastically. Carbon dioxide and other exhaust gases from vehicles and industries are greenhouse gases. This means that these gases trap the heat from the sun – resulting in the Greenhouse effect. Ironically, the greenhouse effect is a natural phenomenon and is required for life. Without this phenomenon, the earth would lose heat quickly and freeze. However, if large quantities of these gases persist, then the greenhouse effect would be accelerated. This can cause average global temperatures to rise, and well as the polar ice caps to melt.

Consequently, this is bad for the environment as well as humans. It can cause endangered animals to become extinct and imbalance the ecosystem. It can also cause severe climatic consequences – often causing loss of life and damage to property.

To ensure that none of these repercussions occurs, the Green India Campaign was launched by the Prime Minister’s Council on Climate Change. This campaign is one among eight others under India’s NAPCC ( National Action Plan on Climate Change). The primary goal of this mission is to increase the quantity and quality of forest areas – which would help with the process of carbon dioxide sequestration. This process absorbs carbon dioxide from the atmosphere and stores it in the trees. It results in the reduction of our carbon footprint and consequently, the greenhouse effect.

Question. 1
What is the Clean India Campaign?

Answer:
Clean India Campaign was launched by India’s Prime Minister Narendra Modi, on October 2nd, 2014. It is also known as the Swachh Bharat Abhiyaan or the Clean India Movement. This campaign was also one of the largest, with a collective 3 million individuals participating in the event.

Question. 2
What is the Green India Campaign?

Answer:
The Green India Campaign was launched by the Prime Minister’s Council on Climate Change. The primary goal of this mission is to increase the quantity and quality of forest areas – which would help with the process of carbon dioxide sequestration. It also aimed to improve the biodiversity of the environment.

Question. 3
What is CO2 sequestration?