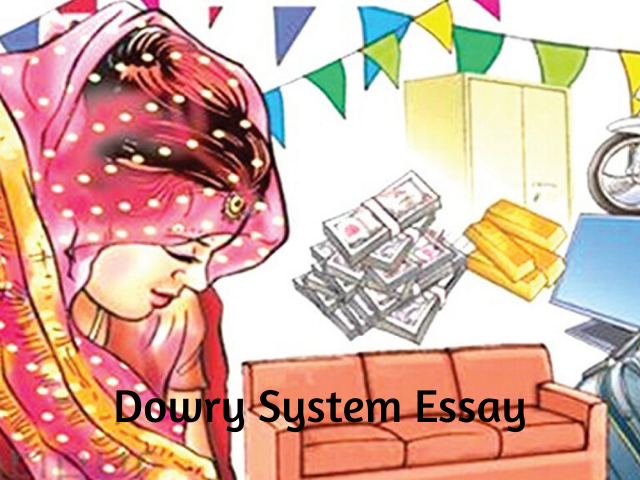 Dowry System Essay: Dowry System Essay is an important topic for students to learn because of its moral and societal implications. Dowry system refers to the practice of the bride or her family giving durable goods, cash, moveable or real property to the bridegroom. The dowry system stems from the ancient and skewed inheritance laws of India. At the time, the dowry was done to stop the disinheritance of daughters.

Moreover, the dowry system can put a financial burden on the bride’s family. This may also lead to the emergence of crime against women, such as emotional and physical abuse, or even homicide. The Indian government outlawed the practice of dowry, specifically under the Dowry Prohibition Act, 1961. From an academic perspective, this topic may be sensitive as it brushes with the age-old Indian traditions and the down-falls associated with this system. Hence, students must articulate their essays carefully and present in a formal manner. Moreover, samples and writing guidelines have also been provided for the students.

What is Dowry System?

The Dowry System can be considered as one of the many blights that plague the Indian Society. The system of dowry refers to the practice of giving gifts or other valuables by the bride to the bridegroom. This practice can be traced back to Ancient India when a gift in cash or kind was given to a bride to ensure her independence after marriage.

During the Colonial period, the practice of dowry was made mandatory by the British. Ever since them, the trend stuck on and into modern times. India’s booming economy has also encouraged even higher bride prices across all social strata. However, with the higher bride prices came increased violence against women. The act of violence is usually perpetrated by the groom and his in-laws. It can range from emotional blackmail and mental torture to physical violence and coercion.

Other types of dowry crime include fraud – where non-resident Indian men would fraudulently return to India seeking a bride. However, these bridegrooms would then abandon the woman and abscond abroad after gaining possession of the dowry. Other crimes include abetment to suicide, where the husband and his family would threaten the wife, cause emotional trauma, induce depression which can end up with the wife committing suicide. Even more horrifying are dowry murders, where the bride is killed soon after marriage because of the groom and his family’s dissatisfaction with the dowry.

Though the Indian Government has outlawed the practice of dowry, it still persists in society like a plague. Even today, reports of violence and even suicides emerge due to dowry. We must prevent such practices by educating future generations about such barbaric traditions.

Introduction of the Dowry System

The Dowry system has existed in India since the olden days. It did have valid reasons when it was introduced; but in today’s modern context, the system causes a lot of issues and problems for our society.

What exactly is Dowry System?

Dowry can be defined as the system where the family of the bride gives durable goods, movable or real property, cash or other items of value to the bridegroom. In the olden days, the bride would be given a sum or items of value to ensure her independence after marriage. However, today’s context has drastically changed for the worse. Greed motivates people to seek dowry; the problem is only exacerbated with domestic violence and other anti-social elements.

History of the Dowry System

The actual origins are not quite apparent, but what was clear is that the colonial rule had enforced this system. At the time, women were not allowed to own any assets, hence, the men were given these assets as an inheritance by the wife’s parents. As stated above, this system did not fit well with modern Indian society.

Domestic violence against women increased- with reports of murders and suicides emerging on the media quite often. Moreover, people have found ways to exploit the system – usually by performing sham marriages – with the husbands abandoning the wives soon after gaining access to the dowry.

This age-old practice may have been introduced due to some necessity. However, in today’s context, this practice seems archaic and barbaric, hence, it must be completely stopped. Though it is outlawed by the government, it cannot be fully stopped if the citizens do not condemn it themselves.

Question 1.
What is dowry system in Indian Essay?

Answer:
Dowry is defined as a system where the family of the bride gives durable goods, movable or real property, cash or other items of value to the bridegroom.

Question 2.
What are the Effects of Dowry System?

Answer:
Effects of Dowry System are as follows: