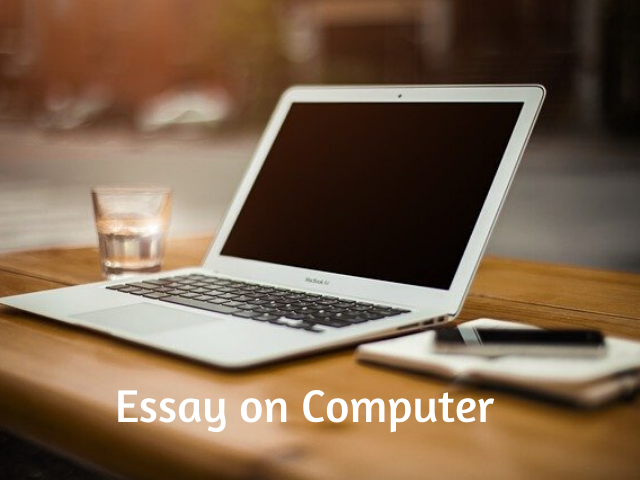 Essay on Computer: Essay on computer is an important topic for most students to learn. This is because the computer is a powerful tool that is used in nearly all aspects of life. From education to medicine and national defense, the computer is an indispensable resource. However, predecessors to computers existed long before the discovery of the transistors. Moreover, the very first computers were not accessible to the general public. This is due to the fact that the first computers were extremely large and ridiculously expensive.

The first computers were essentially the size of a small room and required at least 2-3 individuals to operate it. Today, we can find computers that can fit in the palm of our hands. From an academic perspective, essay on computer is a moderately complex topic as the students have to elaborate on some technical aspects. However, with the samples we have provided, it should not be much of a hassle. Moreover, useful tips and tricks have also been provided to help the student secure more marks or grades for their essay.

Consider adopting the following tips and tricks. These writing tips will help you secure more marks or grades for the essay. Furthermore, these guidelines will help to improve general writing and presentation skills.

How do you define the term “Computer?”
In today’s world, we are all familiar with the term “computer”. In fact, kids are exposed to computers right from their primary classes. But how do we exactly define the term “computer?” From a technical perspective, a computer can be defined as a machine that can be instructed to carry out a sequence of operations via computer programming. A computer may include the hardware, the operating system and other peripheral equipment.

History and Background of Computers
The earliest computers were intended to serve as a device that helps with complex calculations. In fact, the abacus can technically be called the earliest predecessor to the computer. It aided with relatively complex calculations for its time. Fast forward to the Industrial Revolution and we have machines that automated the manual laborious tasks. By 1822, Charles Babbage developed what would become the most direct precursor to the modern-day computer – the Difference Engine. He later followed up his invention within an even more complex machine called the Analytical Engine. Due to his pioneering work in the field of computing, he was called by some as the “Father of the Computer”.

Modern Day Machines
Eventually, complex electrical machines were purpose-built to help with analogue calculations. World War 2 catalyzed the emergence of digital electronic devices that were capable of performing complex calculations. The ENIAC or the “Electronic Numerical Integrator and Computer” was the first general computer. It was quite powerful for its time, able to perform thousands of complex calculations in mere seconds. For comparison, It could complete a complex problem that calculated the trajectory of a missile in under 30 seconds. The same calculations took a single person 20 hours to complete. It was also incredibly large, taking up an area of 1,800 sq ft. It was also incredibly heavy, weighing over 30 tons. At the time of its creation, the ENIAC was called “The Brain” by the press due to its incredible computation power. As powerful as it seems, the ENIAC was quickly succeeded by far more smaller and complex machines. Today, the average modern computer or laptop is millions of times more powerful than ENIAC. IBM’s Blue Gene is one of the fastest supercomputers on Earth today. It is so fast that scientists do not measure their speed in instructions per second.

In conclusion, the computer may have started life as a machine meant for performing calculations. Today, they are an indispensable part of our lives.

Introduction
The computer is one of the most useful tools known to man. Its importance in our society is incomprehensible. Furthermore, computers may seem like a device that had its origins at the turn of this century. However, the central idea of this machine can be traced back to the abacus, several thousand years ago.

When was the first modern computer Invented?
The first computer, in the modern sense, was the ENIAC. It was an abbreviation for Electronic Numerical Integrator and Computer. At that time, the ENIAC was the most powerful computer on the planet, able to perform thousands of complex calculations in a matter of seconds. However, it was extremely large and was very heavy. Its footprint took up an entire room and it generated a lot of heat. However, computers evolved rapidly, with today’s computers being small enough to be held in the palm of a hand.

Applications of Computer
The computer saw applications in many fields from medicine and research to education and defence. Computers can be used to diagnose diseases and help with creating their cure. Computers are also paramount for the safety and security of a country. It can monitor and provide a timely warning for possible dangers and threats.

In conclusion, computers are an important part of today’s world. Without these machines, life would not be the same.

Question 1.
What was the very first “modern” computer?
Answer:
The ENIAC or the “Electronic Numerical Integrator and Computer” was the first computer in the modern context.