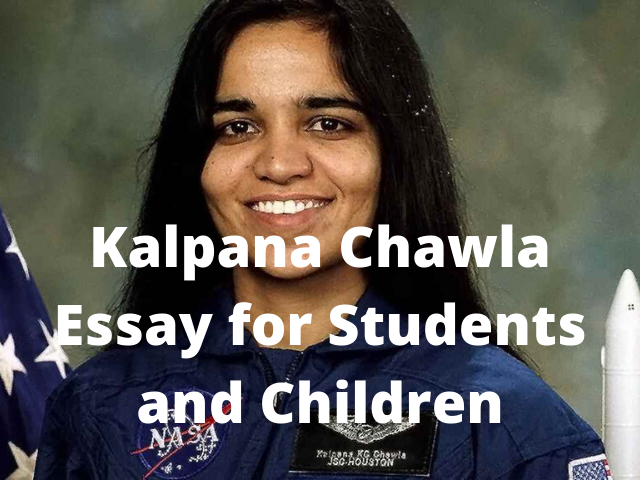 Kalpana Chawla Essay: Kalpana Chawla Essay is an important topic that students must learn about. The essay aims to educate students about Kalpana Chawla – the first Indian-origin woman to go to space. Kalpana had achieved a feat that others could only dream about – she literally went to the stars. An American astronaut, Kalpana was a mission specialist and a primary robotic arm operator onboard the ill-fated Space Shuttle Columbia.

Kalpana left behind a legacy that would inspire many others to follow in her footsteps. She is considered a national hero in India. She was also posthumously awarded the Congressional Space Medal of Honour by the United States. From an academic perspective, writing unbiased facts and figures is the best way to secure more marks.

Furthermore, students must be able to present these facts and figures in a formal, yet engaging way. Doing so will ensure that students will fetch maximum marks for their essays. These tips and guidelines, along with the sample essay are sure to help students secure more marks.

Kalpana Chawla was India’s first woman astronaut. She achieved a feat that many people only dream about. In fact, Kalpana was one among the 566 people who went to space (as of 2020). When put into perspective, out of 7.8 billion people on earth, a total of just 566 individuals have travelled to space.

Kalpana Chawla was born on 17 March 1962 in Karnal, Haryana. Ever since childhood, Kalpana had a fascination with aeroplanes and flight. She even accompanied her father to local flying clubs, where her fascination with planes only grew.

Kalpana was also a very bright student, having graduated from the Tagore School. Her excellent grades helped her secure a seat in Aeronautical Engineering from Punjab Engineering College. She graduated and eventually moved to the United States, where she pursued a Master of Science degree from the University of Texas at Arlington. Furthermore, Kalpana went on to secure a second Master’s as well as a P.hD degree from the University of Colorado Boulder.

Kalpana began her career with NASA in 1988 as a researcher. After securing US citizenship, she applied for the NASA Astronaut Corps,  a unit of NASA that selects, trains, and provides astronauts for various missions in space. She joined in 1995 and was selected for her first flight in 1996

Her first mission in space began on 19th November 1997, aboard the Space Shuttle Columbia. She performed many experiments during her stay. Her flight mission saw her clocking 15 days in space. She safely returned to earth and was eventually selected for the second mission, which was scheduled to launch in July 2002.

However, the second mission posed many technical problems and other unforeseen events right before the launch. Hence, the mission was finally postponed to January 2003. Unfortunately, this would be her last mission as the space shuttle she and six other astronauts were flying in disintegrated.

During the launch, it was speculated that a piece of insulation broke off from the main external tank and struck the space shuttle on its wing. This damage caused a hole to form on the wing, which caused the loss of sensors, and eventually, Columbia itself. On 1 February 2003, Space Shuttle Columbia broke apart when it re-entered the earth’s atmosphere.

This event was captured by people with cameras on the ground as well as other military and government installations. Kalpana’s remains, along with the six other members were cremated and scattered at Zion National Park, Utah.

During that time, the media and many organisations paid tribute to the fallen astronauts through many songs, novels and even naming dedications. The famous English rock band, Deep Purple had released an instrumental song called “Contact Lost” as a tribute. During the ill-fated flight, Kalpana had exchanged emails with the band as she was a big fan. She even carried two of their CD albums to space. Hence, the tragedy was more personal for the band.

Kalpana Chawla died doing what she loved. Her dedication and interest in flight and space travel have resonated with countless other individuals, inspiring them to follow their dreams. She is considered a national hero in India and has posthumously received many awards and medals for her work. Moreover, a mountain was named in honour of the fallen astronauts in Colorado, called the Columbia Point.

Question 2.
What was Kalpana Chawla’s dream?

Answer:
Kalpana Chawla always dreamt of being an astronaut. Even from her childhood days, she was always fascinated with aeroplanes and flight.

Answer:
Kalpana Chawla became famous as she was the first Indian-origin woman to go to space.

Question 4.
What are the achievements of Kalpana Chawla?

Question 5.
What was the name of the space shuttle which Kalpana Chawla flew?

Question 6.
When and where was Kalpana Chawla born?

Question 7.
How did Kalpana Chawla die?

Answer:
Kalpana Chawla died when the space shuttle she was flying on disintegrated when it re-entered the earth’s atmosphere.