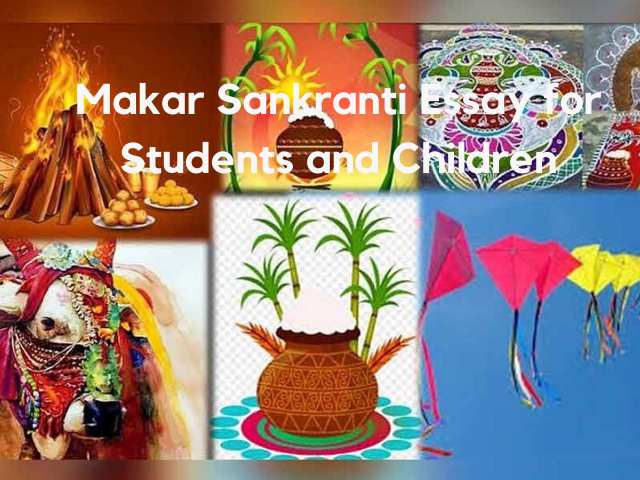 From an academic perspective, Makar Sankranti Essay is an easy topic if students are familiar with the traditions and practices of this festival. Moreover, students will have to elaborate clearly and accurately. Students will also have to follow formal writing conventions to ensure that the content is neat and presentable. Read on to find more about Makar Sankranti Essay in English for class 2, Class 3, Class 7.

Makar Sankranti is a famous Indian festival that is dedicated to God Surya or the Sun God. The festival marks the beginning of the harvest season for the people of India. The festival also coincides with the Sun’s alignment with the constellation of Capricorn. Moreover, the date of Makar Sankranti is set according to the solar cycle while most other Indian festivals are set according to the lunar cycle.

As stated previously, the dates for Makar Sankranti are set according to the solar cycle, hence, the dates usually fall between the solar month called Makara and the lunar month called Magha. These dates correspond to 14th January on the Gregorian calendar. However, it can fall on the 15th as well. The festival also marks the first month with consistently longer days.

Makar Sankranti is one of the most important festivals in India. It is also celebrated in places outside India such as Bangladesh, Nepal, Sri Lanka and even the Sindh community in Pakistan. Though celebrations vary according to the regions, the primary celebration is in the form of flying colorful kites. The festival also garners deep spiritual importance in India – people take a holy dip in rivers like the Ganga, Krishna, Kaveri and Godavari. The act of bathing on this day signifies the absolution of past sins.

People also pray to the Sun God or Surya, thanking him for all the prosperity in their lives. From an agricultural perspective, the festival signifies the time where crops have been sown and all the laborious tasks in the field are mostly over. Hence, it is time for socializing with family and friends.

Makar Sankranti is a pan-India festival, which means, it is celebrated all over India. One of the many traditional celebrations is kite flying – it is celebrated in many parts of India. Moreover, some states hold special celebrations called “Melas”, the most famous among these “melas” is the Maha Kumbh Mela. It is held in a cycle of 12 years at four important pilgrimage sites – Ujjain, Nashik, Haridwar and Prayag. In Karnataka, Makar Sankranti is considered as the harvest festival for farmers.

Makar Sankranti is a revered festival celebrated throughout India. Celebrations vary by state, but nearly all of them fly colourful kites. The festival is also very sacred, with temples around the country performing sacred rituals and poojas. Most people also exchange sweets and adorn new clothes.  Some states celebrate the festival with a grand feast, containing countless food items.

Moreover, this festival is celebrated in many places outside India such as Bangladesh, Sri Lanka, and Nepal. In West Bengal, this festival is also called Poush Sankranti because it falls in the Bengali month of Poush. Celebrations include creating a special sweet and worshipping the Goddess Lakshmi.

Question 1.
Why is Makar Sankranti celebrated?

Question 2.
What do we do on Makar Sankranti?

Answer:
Makar Sankranti is celebrated all over India. One of the many traditional celebrations is kite flying – it is celebrated in many parts of India. Generally, people celebrate the festival by adorning new clothes and exchanging sweets and confectioneries between family and friends.

Question 3.
What is the meaning of Sankranti?

Answer:
Sankranti is derived from the Sanskrit word “Sankranti”, which means the transmigration of the sun from one constellation to the next.

Question 4.
Where is Makar Sankranti celebrated?

Answer:
Makar Sankranti is predominantly celebrated in India. It is also a pan-India festival, which means nearly all states in India celebrate this festival.

Question 5.
When is Makar Sankranti?