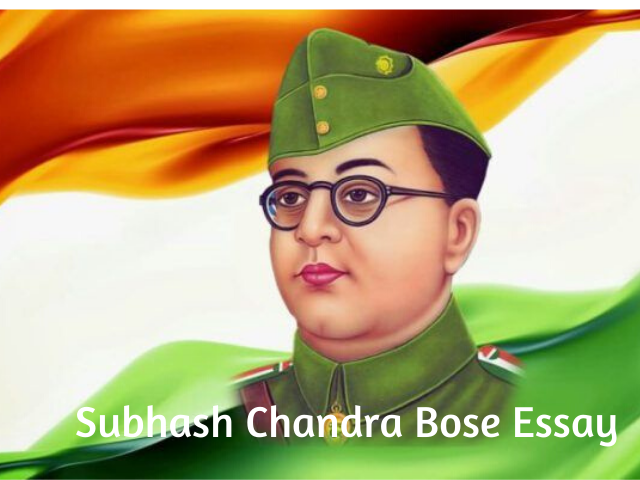 Subhas Chandra Bose became part of the Indian Independence movement when he participated in the Civil Disobedience Movement. Eventually, he became a member of the INC – Indian National Congress. From an academic perspective, the essay on Subhas Chandra Bose is a rather easy topic, provided that they do some basic research and gather information. Moreover, students must ensure that they follow specific guidelines and formally present the content. The samples provided here will be easy to recreate, and the additional tips and tricks will help students to secure more marks for their exams.

Subhas Chandra Bose was an Indian freedom fighter who sought to overthrow the British rule in India. He was born on January 23, 1897, in Cuttack, Odisha. Subhash Chandra Bose became a part of the Indian Independence Movement when he participated in the Civil Disobedience Movement.

Subhas Chandra Bose also became a member of the INC – Indian National Congress. He eventually rose through its ranks, becoming its president in 1939. However, his tenure was quite short as he had resigned from his post due to differences with Mahatma Gandhi and the Congress High Command. The British, during that time, tried to stop Subhash Chandra Bose’s attempts to elicit the freedom movement by placing him under house arrest. However, Bose travelled to Germany to seek help against the British. He had even sought help from the Russians as well.

In 1943, Subhash Chandra Bose travelled to Japan as they agreed to his appeal for help. It was in Japan that he formed his Indian National Army (INA). He also formed a provisional government, which was officially recognized by the Axis powers.

His army, the INA, attacked the North-eastern parts of India and was successful in capturing a few territories. However, their victories were cut short when the INA was forced to surrender due to poor weather conditions and lack of support from the Japanese. Nevertheless, Bose made it clear that he would not surrender. On August 17 1945, Bose fled to escape surrender but was killed when the plane he was travelling in crashed.

The legacy of Subhash Chandra Bose will live on through the freedom movements and the eventual independence of India.

Subhas Chandra Bose was born on January 23 1897, to Janakinath Bose and Srimati Prabhavati. Bose was a very intelligent student, securing second place in his Intermediate Examination.

In 1919, Bose cleared his B.A from Calcutta Presidency College. Next, he travelled to England to pursue higher studies and concurrently prepare for the Indian Civil Services exam. He cleared his IAS and was selected; however, he did not choose to work as this meant serving a foreign government. Bose resigned from his civil service post on April 23 1921.

Bose became part of the Indian Independence Movement when he joined the Civil Disobedience Movement. However, he was jailed for his participation and was eventually let out following a seven-day hunger strike.

Soon after his release, Bose escaped to Germany through Afghanistan and the Soviet Union. Once he reached Germany, he sought help to rid India of British rule. In 1943, Subhash Chandra Bose reached Japan as they had agreed to help him in his endeavour against the British. Eventually, he formed his own army – the India National Army (INA). He had attacked India’s North-Eastern territories and was successful in capturing a few. However, his army had to surrender due to bad weather conditions and lack of support from Japan. Bose did not surrender and fled India to avoid capture. However, he was killed when the plane he was travelling in crashed.

Subhash Chandra Bose was one of India’s revolutionary freedom fighters. He is still fondly remembered for this heroic deeds and selfless patriotism.

Question 2.
When did Subhash Chandra Bose become president of the Indian National Congress?

Answer:
Subash Chandra Bose died as the result of an aviation accident.