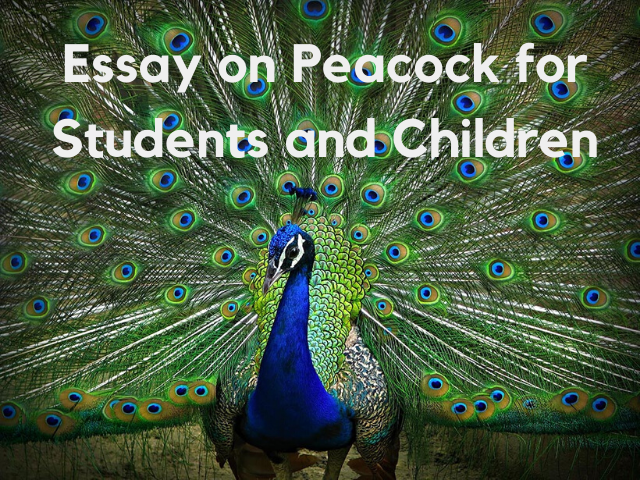 Essay on Peacock: Essay on Peacock is an important topic for students to learn. The main goal of the essay is to educate students about India’s national bird – the Indian peafowl or more popularly called the Peacock. This bird is native to the Indian subcontinent and was later introduced to many other countries. The peacock is a fairly large bird, with an average weight between 4-6 kilograms. The most unmistakable characteristic feature of the peacock is its tail – in ornithology, the tail of the peacock is called the train. It is quite large and colorful; however, only the males possess the train.

From an academic perspective, writing an essay on peacock is rather easy, provided the student can recall the various characteristics and facts about the peacock. Moreover, students have to ensure that they present content in the right way – this includes following formal writing conventions, eliminating jargons and more. Students also need to ensure that they read through the essay and check for mistakes before submission.  Read on to find more about Peacock essay in English for class 4, class 5, class 6, class 8.

In India, the peacock is officially designated as the country’s National Bird. This is due to the fact that the peacock is native to the Indian subcontinent and is one of the most beautiful birds in the world. Males of this species have a large, fan-like tail that is usually used for courtship. Moreover, the peacock has significant cultural implications, from iconic representations, artworks, music, poetry, and dance. Moreover, the peacock has been associated with many Hindu Gods and Goddesses. Not just India, peacocks were adorned around the world as a symbol of beauty and ornamentation.

Technically, the males of this species are called peacocks, and the females are called the peahens. Males and females are collectively known as peafowl. The scientific name of the Indian peafowl is Pavo cristatus. The iconic species of peafowl that Indians recognize is the blue peacock or the Indian peacock. This species is endemic to India and Sri Lanka. Two more species of peafowl exist – the green peafowl and the Congo Peacock. The green peafowl is found in Burma, Java, and surrounding regions. The Congo peacock, as the name suggests, was discovered in the Democratic Republic of the Congo.

Size of a Peacock: The Indian peacocks are rather large birds, with an average length of 100-115 cm from beak to tail. Interestingly, the tail feathers often grow much longer than the entire bird, usually reaching lengths of over 200 cms. However, only the males of this species have the tail feathers. On average, the males weigh between 4 to 6 kilograms, and the females weigh between 3 to 4 kilograms. Peacocks are the largest birds in their family (Phasianidae), which includes turkeys, chickens, pheasants, and partridges.

Peacock Appearance: Indian peacocks have an unmistakable appearance – these birds have a metallic blue colour and a fan-shaped tail with colourful eye-spots (males only). Their long tail is called a train, and its primary function is thought to be courtship- that is, to attract females. The peacock’s head and neck area have bright, greenish-blue iridescent feathers. The peacock’s back has scaly-bronze feathers. The train (tail) is composed of many feathers – up to 200 feathers, with most of these ending in colourful eye-spots. The peahen’s colours are rather dull in comparison to the peacock. It does not have the elaborate tail feathers nor the brilliant, metallic blue feathers on its body.

Peacock Habitat: The Indian peafowl is found in India as well as Sri Lanka. The bird is generally found at elevations of 1800m and below. It prefers the moist and dry deciduous forests, but can also be found near human habitations, especially where water is common. Besides its native habitat, this bird has also been introduced in many other countries such as Mexico, the United States, South Africa, Indonesia, Australia, Portugal, Croatia and Mauritius. Interestingly, Indian peacocks have been spotted in much harsher environments such as Canada.

Feeding Habits of a Peacock: Indian peafowls are omnivorous, which means they eat seeds, nuts, insects and small reptiles and animals. Peafowls are also known to feed on small snakes if other sources of food are not available. In the Gir forests of Gujarat, the birds feed on the Zizyphus berries which have fallen on the ground. Around human habitations, the bird feeds on scraps and leftovers. In cultivated areas, it can feed on a wide range of crops.

Peacock Predation: Peacocks have many natural predators, such as wolves and foxes. Sometimes, large birds of prey, such as eagles and owls, also hunt peafowls. To escape, the bird flies into surrounding trees. Sometimes, domestic dogs also hunt peacocks.

The lifespan of Peacock: In the wild, peafowls are known to live for 15 years. However, in captivity, they can live for 23 years or even more.

Cultural Perspective of Peacocks: Peacocks have a significant cultural impact in India as well as many other countries around the world. The bird has been seen in many historic depictions such as rock sculptures, and stone engravings. In ancient Indian culture, the peacock is often associated with the Gods and Goddesses. For instance, Lord Krishna is often portrayed with a peacock feather in his headband. In Buddhist culture, the peacock represents wisdom. Its feathers are used as ornamentation and in many rituals. we soonly update essay on peacock in English, Sanskrit, Hindi, Gujarati, Urdu, Bengali, Tamil.

Conclusion on Essay on Peacock

The peacock is one of the most magnificent birds ever, with its bright, colorful plumage and even more colourful cultural implications. It is India’s national bird due to this very reason. It has also been depicted in music, dance, poetry, and many Indian traditions. However, humans have destroyed most of its natural habitat; hence, it is now classified as a vulnerable species. We need to ensure that the right measures are taken so that this fabled bird does not become extinct.

FAQ’s on Essay on Peacock

Question 1.
Why is the peacock our national bird?

Answer:
Peacocks have a significant cultural impact in India and are found in many depictions such as rock sculptures, and stone engravings. In ancient Indian culture, the peacock is often associated with the Gods and Goddesses. It was also easily recognized by the common man; hence it is our national bird.

Question 2.
What is interesting about a peacock?

Answer:
Indian peacocks have an unmistakable appearance – these birds have a metallic blue colour and a fan-shaped tail with colorful eye-spots. However, only the males have these long tails.

Question 3.
Are Peacocks a symbol of good luck?

Answer:
Yes. People have associated peacocks with the Gods and Goddesses for centuries in India.

Question 4.
What do Peacocks eat?

Answer:
Yes, peacocks can fly just as well as other birds despite its massive tail.