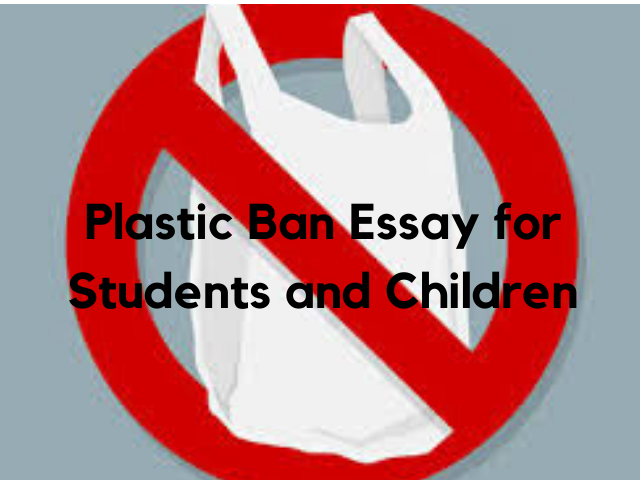 Plastic Ban Essay: Plastic Ban Essay is an important topic for students to comprehend. Plastic has traditionally been given freely to customers who purchase products from a vendor. These plastics were single-use plastics that are made from low-density polyethylene plastic (LDPE). It provided a convenient and hygienic way of transporting goods. However, plastic bags used non-renewable resources in their manufacturing processes such as crude oil and natural gas. Moreover, they introduced problems with the disposal and other environmental problems.

From an academic perspective, a plastic ban essay is an easy topic to write if students can familiarize themselves with the facts. However, to secure more marks, students must present their content in a proper way, ensuring all formal writing conventions are integrated into their essay. To secure maximum possible marks, students must make sure their essays are engaging to the reader and must provide some values or key takeaways.

Furthermore, students must ensure that their essays are easy to read and understand by their target audience without sacrificing quality. We have provided the following sample essay based on the aforementioned criteria. It is designed to be easily comprehended by the students and recalled in the exam. Moreover, the essay ensures that all the formal writing conventions are integrated into the essay.

Plastic has been around for nearly a century, finding application across various fields and industries. In fact, if we take a look around us, we can find at least one or two items made entirely of plastic. For a short period of time, plastic, especially low weight plastic bags were considered as the most used product in the world. Customers were given these lightweight plastic bags when they purchased a product from any vendor. Moreover, since these bags were extremely cheap to manufacture, they were given free of cost to the customers. However, the environmental implications of plastic can be observed now.

Effect on the Environment Due to Plastic

Lightweight plastic bags were traditionally made of low-density polyethylene plastic or LDPE. These plastic items were primarily produced using petroleum or natural gas, which are non-renewable resources. It also became increasingly difficult to dispose of as it was not biodegradable. Over time, these plastics quickly accumulated in landfills, thereby reducing its efficiency. One of the solutions proposed for resolving this problem is recycling – however, it is not widely implemented especially in India.

Effect on Climate by Usage of Plastic

As stated previously, the production of plastic uses non-renewable resources like coal and natural gas. This directly contributes to global warming and increased carbon footprint. Using non-renewable resources directly contributes to the production of greenhouse gases, which can change the dynamics of the planet. In the long run, this can have disastrous consequences on our planet – from extreme weather patterns to instability in the ecosystem. Humans will be drastically affected if the ecosystem becomes unbalanced. There would be widespread shortages of food, which can directly affect an economy. Continued production and usage of plastic will only worsen the situation.

As stated previously, the biggest problem of plastics was its inability to decompose. However, researchers found that a number of microorganisms and certain animals were able to break down and degrade polythene, the main component of plastic.

A bacteria called Pseudomonas fluorescens had the ability to degrade nearly 40% of the weight of plastic bags in less than three months. In 2014, a Chinese researcher stumbled upon a moth called the Indian meal moth that had the ability to digest plastic. Careful analysis of the moth showed that the insect had not only digested the plastic but also significantly degraded it.

A country like India does not have the required resources to strictly enforce the ban, hence this method may not be as viable as the latter. Another method is to recycle plastic bags, however, according to recent statistics, just 5% of plastic bags return to recycling facilities – the rest end up on the streets where they become litter.

Plastic Bags Should be Banned in India

Plastic bags that are under 20µm in thickness have been banned since 2002. However, the enforcement of the ban is almost non-existent. The primary reason why plastic bags less than 20µm is banned is due to the fact that cows mistake these bags for food and they end up eating it. Consequently, this blocks up the cow’s intestines and results in its death.

In 2016, the Ministry of Environment passed a regulation banning the use of polythene bags less than 50µm thick. However, this ban was also poorly enforced. Interestingly, in the same year, Sikkim successfully banned the usage of all plastic – from plastic water bottles to plastic bags and polystyrene foam across the state. Hence, it was titled as India’s first fully organic state.

Today, the repercussions of plastic were better understood than a decade ago. Hence, many countries have opted to outright ban plastic or at least recycle existing plastic. This act has led to reduced carbon emissions as well as addressing many other related problems. New discoveries and alternatives to tackle the problem of plastics will pave the way for a new generation in a much cleaner and greener planet. We soonly update Plastic Ban Essay in Hindi, English, Marathi, Kannada, Telugu.

Question 1.
Why are plastics banned?

Answer:
Most plastic items were produced using petroleum or natural gas, which are non-renewable resources – this directly leads to increased carbon footprints. It is also difficult to dispose of as it is not biodegradable. Hence, plastics are banned in many countries.

Answer:
Many countries have successfully banned plastic. In India, Sikkim is the very first state to have completely eliminated the use of plastics.

Question 3.
When was plastic banned?

Answer:
Plastic was first banned in India in 2002.

Question 4.
Which plastic is banned in India?

Question 5.
What are the negative effects of plastic?

Answer:
Plastic is manufactured using non-renewable resources like coal and natural gas. This directly contributes to global warming and increased carbon footprint. Moreover, plastic does not decompose easily, hence, it remains in the environment for a long time.