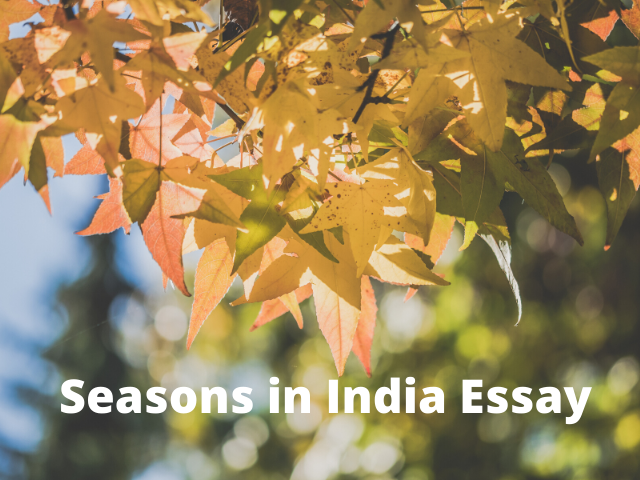 Seasons in India Essay: Seasons in India Essays primarily aims to educate the readers and students about the various seasons observed in India. India is a rather large country with a multitude of weather conditions spanning across many states. Hence, making generalizations about Indian seasons are not simple. Moreover, the climate in Southern India is comparatively warmer than Northern India. The rainy season, also called the monsoon season, is one of the most pivotal seasons of India due to its influence on crop growth.

From an academic perspective, Seasons in India Essay is a crucial topic for students to practice as it is asked in most exams. The concept itself may seem simple enough; however, there are many technicalities that the student needs to keep in mind when writing about the seasons. For instance, the timing of seasons in India does not correspond to the rest of the world. Similarly, there are other technicalities that the student needs to keep in their mind. Moreover, students need to focus on their essay presentation. Read the following tips and tricks to help with presentation and to fetch those extra bits of marks:

Introduction
India is the seventh-largest country in the world, covering a total area of 3.28 million square kilometres. From the frigid mountain ranges of the Himalayas to the humid forests of Kerala, India has a multitude of climate and weather conditions that span many states and geographic landmarks.

Seasons in India
It is common knowledge that a season of a place varies with the latitude, altitude and distance from the sea level. Even the hours of sunlight during the day affects the weather. Indian Meteorological Department follows the international standard of four climatological seasons: summer, winter, monsoon and autumn (post-monsoon). The summer season, in India, begins in March and lasts until the end of May. Monsoon season follows, typically from the first week of June to the end of September. October to December is considered as Post monsoon season. This is followed by winter, which starts in January and ends in February.

Average Temperatures
India’s coldest season occurs during January and February. Average winter temperatures typically hover around 10-15 ℃. The temperature drops even more if one proceeds towards the north and northeast. The summer season starts from March, with average temperatures reaching 32-40 ℃.in most interior parts of India. Summer season ends in May and is subsequently followed by the monsoon season. During this season, the southwest summer monsoon sweeps over India. The rains typically recede by the end of September. Post-monsoon season, or autumn, begins right after the rainy season, typically at the beginning of October. North-West India usually experiences no clouds during this season. Autumn ends in November, which marks the beginning of the winter season.

Conclusion
In conclusion, India has a vast and diverse geographical area. Hence, it would be quite difficult to generalize India’s weather. Moreover, India’s official meteorological department follows the international convention of four seasons – Summer, winter, monsoon and autumn.

Introduction
India is one of the largest countries in the world. As a result, it has a multitude of weather and climatic conditions that are spread out over the many states. India is geographically rich as it has diverse landscapes such as hot deserts, high mountain ranges, and lush forests. Moreover, there are many factors that affect the seasons – for instance, the altitude or the elevation of a place determines the temperature and humidity. The distance from the sea level and latitude also play significant roles in the climate of a region.

Seasons of India
The Indian Meteorological Department follows the standard four climatological seasons – Summer, winter, monsoon and autumn. However, the Hindu calendar elaborates that there are six seasons in a year in India – Spring, summer, monsoon, autumn, pre-winter and winter. The Hindu calendar is of particular importance because the dates for most Indian festivals are set according to this calendar.

Spring Season
The spring season typically begins in March and lasts until the end of April. In India, the spring season is also known as Vasanta Ritu. This season occurs before the summer begins, with temperatures averaging around 32 ℃. The days eventually become longer, and the nights become shorter. Spring season also boasts a slew of festivals such Holi, Chapchar Kut and Parippally Gajamela. From a biological perspective, this is also the season where most animals mate and plants reproduce.

Summer Season
In Indian culture, the summer season is known as Grishma Ritu. This season follows the spring season, typically beginning from May and ending in June. However, the spring season in the Himalayan states generally overlaps with the first two in weeks of summer in the southern states of India. The average temperature across Southern India usually exceeds 33 ℃. Some regions, such as the Southern coastlines of India experience temperatures as high as 36 ℃. Festivals that fall in the summer months include Ramadan, Thrissur Pooram, Mount Abu Summer Festival, Buddha Purnima and Buddha Jayanti.

Rainy Season
In India, the summer season is also called the Monsoon season. In Hindu literature, it is known as Varsha Ritu. The season begins right after summer, with the first spells of rain landing at the beginning of July. This season also has a profound impact on agriculture and other farming activities. The rainy season lasts until August. Popular festivals that occur during this season are Palkhi Festival, Puri Rath Yatra and Karsha Gustor Festival.

Autumn Season
Autumn lasts from the beginning of September and ends in October. Trees shed their leaves in preparation for the winter. Before the trees shed, the leaves take on a brown-yellow hue, which is an indication for the trees to stop making food. Similarly, animals also start preparing for the winter by bulking up on food. Festivals that occur during the autumn season include Onam, Bakrid, Chakradhar Samaroh and Athachamayam Festival.

Conclusion
In conclusion, India is a vast country with diverse geographical areas. India’s official meteorological department follows the international convention of four seasons – Summer, winter, monsoon and autumn. However, most festivals in India follow the Hindu calendar, which consists of six seasons.

Question 1.
How many seasons does India have?