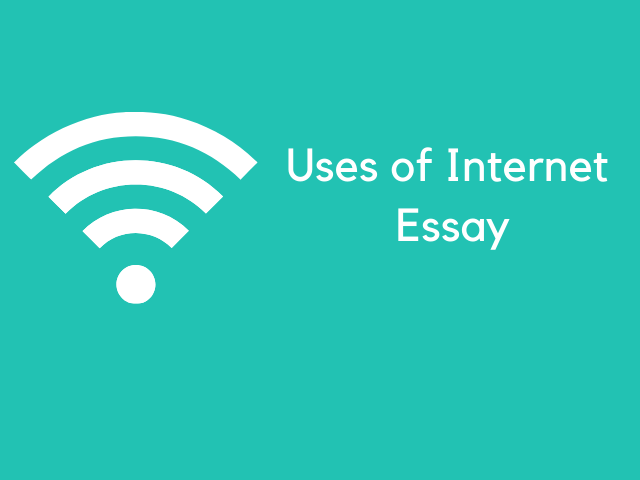 Uses of Internet Essay Introduction: Uses of the Internet are many from academics and education to networking and job-hunting. However, this is just the tip of the iceberg; the internet has many more applications in diverse fields from medicine and engineering to defense and stock markets. The progress that we see today is the culmination of many years of research and development in the field of Information technology and allied fields.

Uses Of Internet Essay, from an academic perspective, is a topic often asked in exams for primary school students. The primary goal of the essay is to educate students about the various benefits of the internet and its potential drawbacks. The following are a few tips and tricks for students to adopt when writing an essay on the internet or any other topic. Moreover, these tips and tricks will help students to improve general writing skills, which will prove very helpful in future exams or higher classes. Read on to find more about Uses of Internet Essay Writing.

Brief History on the Internet

The internet has been around for several decades, with the very first iteration starting out as a military research project in the late 1960s. Ever since then, it has evolved and undergone a multitude of changes before transitioning into the familiar world wide web that we know today.

Essay on Uses of Internet in our Day Life

The internet has many applications, ranging from learning and education to social networking and commerce. However, there are many more applications, some of which are more intriguing than others. For instance, the internet has evolved parallel technologies like cloud computing, which could soon enable most of us to use our smartphones and portable devices to many times their current potential. In the most basic sense, the workload or the “heavy-lifting” of processors are offloaded to a cloud server, which is processed and then, seamlessly sent back to the end-user. Similarly, this is one of many such uses of the internet. Other popular uses of the internet include:

In conclusion, there are many uses of the internet – from online shopping to email and social networking. Moreover, there is a potential for new niches to be created on the internet.

What is Internet and What are the uses of Internet: The official birthday of the internet is January 1, 1983. However, it was not an instantaneous invention, instead, it was the culmination of years of research and development. 20 years earlier, the United States Department of Defence created the ARPANET, which is an abbreviation for Advanced Research Projects Agency Network. This invention eventually led to the creation of the internet as we know it today.

Uses of Internet in Points

Ever since the internet was created nearly 60 years ago, there have been lots of technological advancements and developments which proved to be useful in various fields. The most common uses of the internet are:

Conclusion of Internet Essay: In conclusion, there are many uses of the internet – from information seeking and E-commerce to education and entertainment.

FAQ’s on Uses of Internet

Question 1.
When was the internet invented?

Answer:
The earliest iteration of the internet was invented during the 1960s. However, the officially recognized date of inception was January 1, 1983.

Question 2.
What was the precursor to the internet called?