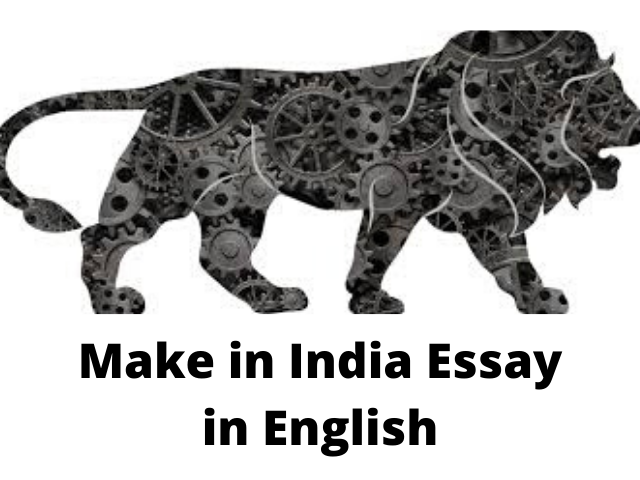 Make in India Essay: Make in India Essay aims to educate students about the Indian Government’s program to encourage companies to manufacture products in India. The basic idea behind this programme is to produce commodities or services that can be consumed or used as a commodity in India. This initiative provides many benefits such as a business-friendly environment and an investor-friendly ecosystem. Moreover, countless jobs will be created as a result, reducing unemployment numbers.

This plan is not new and has already been implemented in other countries such as the United States under the name “Buy American” (under Obama’s administration). From an academic perspective, students must thoroughly understand the concept before elaborating it in their essay. Moreover, it would be very beneficial if the student practices the essay before their exams as it helps to recall information with ease. The samples we have provided aim to make the student understand the concept with ease. Read on to find know more about how to make India great essay.

What is Make in India?

The Make in India initiative was launched on September 25, 2014, by Prime Minister Narendra Modi.  The idea behind the initiative is to produce services or commodities of demand within the country. This initiative opens up a whole new landscape for investors and businesses alike. Moreover, it creates countless job opportunities in the country.

One of the primary focuses of this initiative is to provide the required infrastructure to set up businesses. Furthermore, India gave investment commitments of nearly INR 16 lakh crores between 2014 to 2016. As a result, India emerged as one of the top destinations for foreign direct investments, surpassing China and the United States. The policy allows for 100% FDI in all the 100 sectors except the defence and space industry. This opened up many new horizons for foreigndirect investors and businesses.

To sum up, Make in India initiative focuses on these three criteria:

Implications of Make in India Essay

Most of these have provided fruitful results. For instance, Kia Motors Corporation, an automobile manufacturer from South Korea invested nearly USD 1.1 billion in 2017 and built the company’s first manufacturing plant in Anantapur, Andhra Pradesh. This resulted in the company hiring 3,000 employees, and pushing out over 3 lakh cars. The CEO of Kia also plans to create 10,000 more jobs by 2021, thereby providing a livelihood for many. In 2019, Elon Musk, the CEO of Tesla Motors expressed his interest to join Make in India by commencing operation 2019-20.

The Make in India initiative also led to Aramco, one of Saudi Arabia’s largest oil companies, to sign a deal with a consortium of Indian oil companies to build a refinery and petrochemical project worth USD 44 billion on the west coast of India. This deal has the potential to provide job opportunities for many. Similarly, there are many such foreign direct investors who are ready to invest in India and transform the nation for the better.

Advantages of Make in India Essay

Make in India initiative has many advantages. These advantages are as follows:

Disadvantages of Make in India Essay

In theory, this initiative is almost perfect in its goal to improve the Indian economy. However, there are some disadvantages that need to be discussed:

FAQs on Make in India Essay

Question 1.
What is the concept of Make in India?

Question 2.
Who launched Make in India?

Answer:
The Make in India initiative was launched on September 25, 2014, by Prime Minister Narendra Modi.

Question 3.
What is the benefit of Make in India?

Answer:
Make in India has the following benefits:

Question 4.
What are the 25 sectors of make in India?