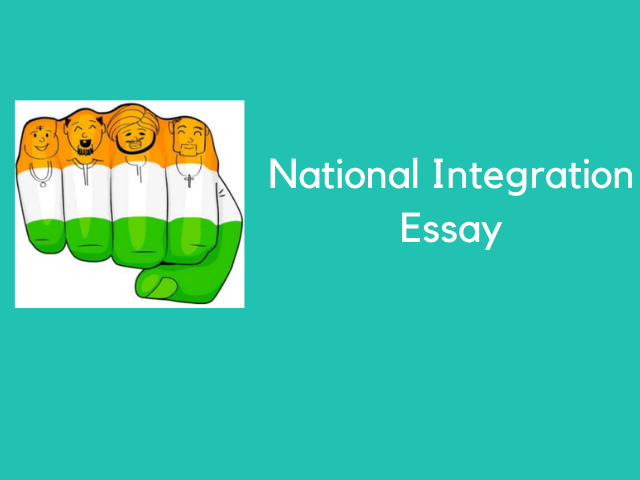 From an academic perspective, writing the perfect essay on National Integration may not be easy for all. However, the samples provided here are designed to ensure that students can grasp with ease and reproduce the same in an exam. Also provided are useful tips and tricks that can fetch more marks if students are able to adopt them.

What is the National Integration?

National Integration is a term that relates to a sense of harmony and unity among the many distinct people of a country. Most often, countries have millions of people from various backgrounds, and to survive in peace, national integration is paramount.

However, the idea is not new; ever since the rise of civilization aeons ago, man has had conflict over various differences. Generally, conflicts are a strain on society as they use up valuable resources and labour, which could have been used elsewhere.

The primary role of national integration is to create a sense of unity. This is done by offering a fair and even platform for all citizens irrespective of their caste, creed and gender. This promotes the nation’s growth and development.

India is a very large country, with a population of more than 138 crores as of 2019. This means there are many religions, many castes and creeds existing within India’s borders.  Hence, national integration for India is paramount towards maintaining peace and harmony. Furthermore, national integration increases economic growth and increases loyalty for the nation.

The conflicts in the Middle East for the past few decades are an example of how society fails due to the lapse of national integration. Communities of individuals have decimated each other over differences in the culture and creed. Today’s terrorist organizations disrupt peace by targeting the national integration of a nation. Anti-social elements take advantage when differences in opinions arise. Even though electronic media, rumors can be propagated that can cause havoc in society.

In conclusion, national integration is paramount for the growth of a nation. Without this crucial element, society fails to function efficiently, thereby affecting individual citizens, as well as the entire nation.

National integration is a term that describes the harmony and unity which exists among the citizens of a nation. This term has evolved from older phrases and mottos which promotes unity among diverse groups of individuals. A similar phrase, “Unity in diversity” could be considered as a precursor.

Origins of this particular phrase can be traced back to the 12th century to a Sufi philosopher named Ibn al-Arabi. The central idea of this phrase was to prevent conflict, which often had a disastrous effect on a nation’s economy. Conflict, in general, is never sustainable for a nation in the long run. However, human nature is something that cannot be changed, hence, conflict is mostly unavoidable.

As stated previously, the primary role of national integration is to promote peace and harmony. However, it serves many other crucial functions such as:

Terrorist organizations seek to disrupt the peace of a nation by targeting its national integrity. For instance, any differences or disparity is exacerbated by anti-social elements. These activities can cause economic unrest and also help propagate falsified news or rumors. Moreover, in today’s day and age, technology is a boon; however, it can also be used against a nation.

The War in the Middle East can be quoted as one of the most infamous examples of how a society plunges into disarray due to a host of underlying issues. However, the most prominent reason can be the failure of national integration, where differences among different ethnic groups caused civil unrest, which displaced millions of citizens and caused the deaths of countless more.

In conclusion, national integration is crucial for the growth and prosperity of a nation. Its absence can lead to the downfall of society and the eventual collapse of the country.

Question 1.
What is National Integration?

Question 2.
What is the importance of national integration?

Answer:
As national integration demonstrates a crucial part in the development of a country, it becomes important to develop the feeling of national integrity

Question 3.
What is the meaning of national integration?